The infrared camera is the tool to control your wirings and electric cupboards without any contact. Quick and safe method, defaults are localised in a few minutes.

Let present some examples from industry:

There are many other overheating causing cases like bad ventilation, a too low gauge circuit breaker, defective connections, a bad dimensioning cables/load, etc... All these defects are detectable and measurable with infrared thermography. 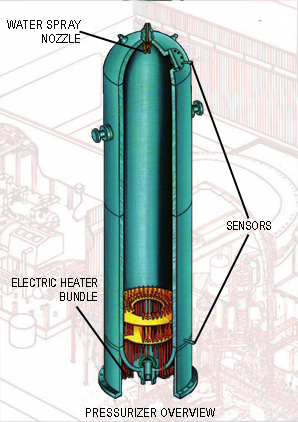 The pressurizer is a vertical cylindrical tank with two hemispherical ends and an electric heater bundle at bottom. His top is equipped with a water spray nozzle and expansion pipes.

This equipment must be fully operational because it controls the pressure regulation and it maintains water/steam balance inside the pressurizer.

It is useful to control distribution boxes and penetrations associated with electric heater bundle to detect connections overheating.

Bellow: an overheating point inside a distribution box (SP1 point to 84°C). The difference of temperature between two checked points is over 28°C. 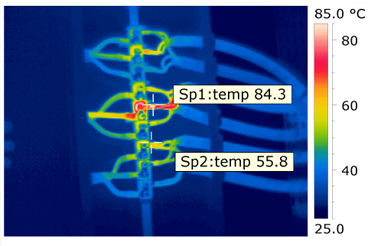